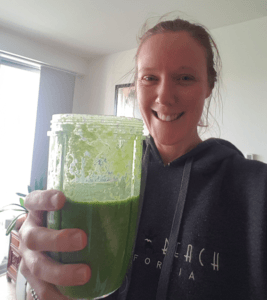 It all started when I was at University when I started to feel really tired.  I was at an equine college so was also trying to ride everyday and stay fit, as well as study and attend classes.  I found myself wanting to sleep more and more though between classes and was struggling to learn.

After collapsing at a state horse eventing competition, my mother took me to a doctor back home and found out I had no iron in my body.  I was put into hospital and infused with iron overnight.  Everything improved that year, but by the end of the year, my iron levels were very low again and the doctor didn’t know what was causing it to disappear.  He had no answers for me.

Fast forward to today and I was also finally diagnosed with Chronic Fatigue Syndrome (CFS), was told I had Anemia and even later down the track was also diagnosed with hemorrhoids.  I was first told by my doctor at the time, to go on antidepressants for my CFS, which gave me really weird dreams, so I took myself off them only about a week later.  I’ve also had skin issues, low blood pressure and frequent tiredness.

My mother lead the way on finding another way to help me through alternative means.  That’s when we first went to Derek Symonds Health Centre (Naturopath) and he did a live blood analysis on me, as well as a urine test and saliva test.  Seeing my blood straight away up on the screen made me sad.  He said they’re meant to be round blood cells and moving fluidly, but mine were weird shapes and seemed to be limping.  I also had a lot of candida in my body.

He put me on a strict diet which included no sugar whatsoever including no fruits.  I was only allowed to eat fish and lamb and the only sauce I was allowed was fresh lemon juice.  I was also given liquid vitamin drinks to take as well as tablets to boost my system.  The liquid drinks were disgusting and really struggled to drink them, but was also determined to finish them to get better and have more energy again.

After that time, I went out on my own and knew to watch what I ate, get plenty of sleep and to try and stay as active as I could.  I researched a lot of diets, health drinks, vitamins and programs.  From that period to today, I’ve learned to listen to my body more with how it feels after I eat something.

The next major issue I remember was when I was working at a tour desk on my own, we were given a box of favourites cadbury chocolates and I was hungry.  I ate 4 of them and within a short space of time I got like a cramp or what felt like a stitch in my side.  I kept working, but it slowly got worse to the point where I couldn’t stand up and was in a ball on the floor.  I haven’t touched cadbury chocolates since that day and have never had cramps that bad again.

I also used to get a lot of wind and lighter cramps, but I never noted what I had eaten before that.  My sister got sick of the wind and told me to go get an intolerance test done.  Being a member of Medibank at the time, I looked up someone close by who did it and booked in a time to see Romi Hellingrath who is a Naturopath.  After doing the test I found out that I was highly intolerant to dairy, eggs and Leek, so even though I was drinking soy milk/rice milk/almond milk at the time as I was taken off dairy from the first Naturopath I went to and haven’t been able to go back to normal milk because I don’t like the taste anymore.  I was still having dairy in anything else which included cheese, spreads and sauces.

Eggs was a shock as I was a huge fan of eggs and had them nearly everyday, but to see if it made a difference I decided to go off them as well.  In a short space of time I’d noticed my wind wasn’t as bad.  After having another cramping issue when I’d had a glass of wine, I decided to avoid all wines as well, especially when we found out how many sulfites and preservatives go in them.

So learning a bit about foods, processing and growing of them, I had even decided to go mostly organic by this stage and had started to look at all ingredients in everything I bought.  My close friend also more recently got me a book for Christmas called “The Plant Paradox” and after reading that and it making sense to me, I’ve started to slowly incorporate that lifestyle change as well.  I have since been aiming to follow a lectin free lifestyle and my body and tummy feels so much better when I avoid foods with lectins in them.  I have even become an ambassador for The Gundry MD website and have tried his supplements to find they help really well too.  If you’re interested in purchasing any of the Gundry supplements, foods or skincare you can get up to 70% off through my special link.

Just before that book my husband bought “The Fast Diet” as well which sounded good and I found I had more energy when I ate less.  So from that book, I incorporated intermittent fasting and my body has got used to that now to the point where I need to skip breakfast every day or have it really late as I’m just not hungry in the mornings anymore.

So from everything I have learned so far over the years, I’ve made it a priority now to look after my health.  It seems without good health, you can’t do much else.  So this is a forever healthy journey for me now and hopefully for others too.  I will constantly share recipes and updates on things they may benefit others as well with their health.  Feel free to comment on any post here or send me a message.  Thank you for reading and welcome to Forever Healthy Journey.